Tickets were priced at $1 or half price for children's admission.

Great success of the child pianist. Irving Hall - Miss Teresa Careno, the child pianist, eight years of age, will give her second grand concert, on Saturday evening, Nov. 29, Madame Elena D'Angri, Mr. William Castle, Mr. Theodor [sic] Thomas, Signor Abella and others. In an entirely new and brilliant programme. Tickets $1. Children half price. No extra charge for secured seats, the sale of which will commence this morning, at Beer & Schirmer's, No. 701 Broadway; Sibell & Salisbury's No. 7 Nassau St; Scharfenberg & Luis' No. 769 Broadway, and at Irving Hall. Miss Carreno will perform the following pieces: Barcarolla, by Thalberg. Fantasia "Lucia" by Prudent. Rondo Capriccioso, by Mendelssohn. Fantasia, "I due Foscari," by Rosellen.

Miss Teresa Carreno's second concert at Irving Hall, on Saturday evening, confirmed even more strongly than her first the purely artistic claims on the community which this marvelous young player possesses. There are many performers who can boast of strength, and a few who have her execution, but it would be difficult to mention another who has her exquisite perception of musical thought, her delicate sensibility to form. These things, which come to her by nature and not by application, give her a position which no other juvenile performer on the piano has ever commanded. Being also of a kind that insures instant recognition, they explain the furore which already exists concerning this singularly gifted child. The programmes, aside from Miss Carreño's performance, introduced some admirable pieces by Mme. D'Angri, Mr. Wm. Castle, Mr. Theodor [sic] Thomas and Mr. F. Eben--artists, of whom it is unnecessary to say more. Signore Abella assisted with his usual ability as a pianist and conductor. Miss Teresa Carreño's third concert will take place at the same establishment, on Tuesday next, the 2d inst.

A second concert on Saturday evening of the remarkable child, Miss Teresa Carieno [sic],--eight years of age,--who plays masters' music, resulted in great [?] to the audience. They heard more than they expected. Not only does Miss Teresa get over [?] keys in tough music, with remarkable dexterity [?], but also plays with a meaning, sentimental expression, greater than would seem possible [?]--The admirers of rare young gifts with [?] gratified by attending her third concert on Tuesday evening at Irving Hall. She has been assisted by Mad. D'Angri, Mr. Thomas, etc. 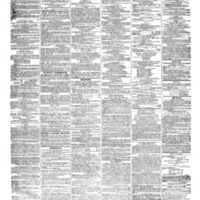