Mme. Teresa Carreño, who gave a piano recital two months ago, gave another one yesterday afternoon in Carnegie Hall. She displayed the same characteristics in her playing as she did before, which are not in all respects those remembered with the greatest pleasure in her former appearances here. She was more subdued than she used to be; there was less of brilliancy and sheer physical power; there was less of the sweep and technical bravura that are associated with her name. There were grace and at times charm. Her tone seemed to lack breadth and carrying power.

She played Beethoven's sonata in F minor, called the "Appassionata"; pieces by Chopin, Schumann's "Etudes Symphoniques," a group of pieces by Edward MacDowell, "Les Orientales," op. 37, after a poem by Victor Hugo, and Liszt's E major polonaise. Mme. Carreño has made active propaganda for MacDowell's music, not only in this country, where it might be supposed to be to her advantage on account of its special appeal, but also in Europe, where it was really a labor of love.

There is something touching in this loyalty of the distinguished artist to her pupil, who in later years rose to a distinguished position as a foremost American composer; and it is a trait for which American music lovers may well hold her in affectionate regard. 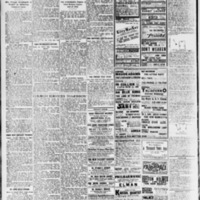