Carreño appeared in the second concert of the Philharmonic Society of Brooklyn with Mme. D'Angri, Mr. Toulmin, harpist, and the Teutonia Society of New York. She performed Grand Fantasia and Variations on Bellini's "Norma," op. 12 and Variations on "Home! Sweet Home!," op. 72 (Thalberg, Sigismond).

and the Teutonia Choral Society of New York, under the direction of Mr. Heinrich Gilhaer.

Symphony no. 1, in C major - Beethoven

The last of the Carreno concerts will take place this evening at Irving Hall. Miss Carreno is a great attraction and her playing is so wonderful that many have questioned the correctness of her age. A certificate from the Spanish consul certifies that she is but eight years of age.-- The care and correctness with which she performs the difficult compositions of Prudent, Liszt, Thalberg and others, is perfectly wonderful. She has been assisted by Mme. D'Angri, Mrs. Jenny Kempton, Miss Salembier, Castle, the new tenor, Theo. Thomas, violinist, and Eben, flutist. Mr. Harrison, the enterprising manager, and owner of Irving Hall, has had the privilege of presenting this new artist(?) to the public and he has been amply repaid.

Brooklyn Philharmonic.—The Second Concert of this democratic art association came off on Saturday Evening last, and was, in all points considered, a complete success. It was a happy thought which suggested the organization and combination into a society of the local artists of instrumentation, thereby affording the classical ear and taste of the community a periodical feast of the richest and rarest soul-aliment flowing from the inspired genius of the mommouths of the music pen. As to whether pure aesthetic art meets with the response and appreciation of real congeniality from all the ears into which it rushes, and every heart into which it peers, we refrain from debating.

The programme was as follows:

The baton appears to trouble the directors amazingly. Conductorship with them has suddenly assumed a  character requiring their particular and continued attention, and they exhibit a remarkable zeal in the process and progress of change. Last season Bergmann was the man, who was permitted to quietly drive his orchestral team without any “catching behind” of the directing board. Mr. Theodore Thomas, as maestro, exhibits all the qualifications essential to his part, and really graces the position.

Madame Elena D’Angri is always good, and scarcely ever fails to win the favor and plaudits of her audience. Her style is artistic and dramatic; and, being stage-bred, she makes all contribute to her success, instead of detracting therefrom. “O! Verita!” from Meyerbeer’s “Prophet,” and “Non piu mesta,” from Rossini’s “Cenerentola,” were marked in their delivery, and in pleasing conformity with the demands of the composers. She was encored in each, giving, after the latter, her famous “Rataplan.”

The Teutonia Choral Society, conducted by Mr. H. Gelhaar, gave, very acceptably, the “Harpist Song,” as evidenced by the encore, and also the Danish National Song, “Holger Damke,” in “Struensee.”

Miss Teresa Carreno is a little wonder, but labored under some disadvantage. Her Matinée of the morning somewhat unfitted her for the evening's performance. Her execution of running variation and chromatic passages, is remarkable, but the little hands are so taxed by full chords that expression suffers somewhat in consequence.

But the gem of the performance was “Struensee,” which in beauty, magnificence, and variety is equal to anything which Meyerbeer ever wrote. It is the music to the tragedy of “Struensee,” written by the great composer to do justice to the memory of his brother, Michael Beer, who was the author of the tragedy. Surely no man could wish his name embalmed in a richer offering than this! Its rendition was intensely satisfactory. 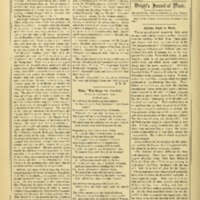