The Carre単o family set sail from Puerto Cabello, Venezuela to Philadelphia in late July 1862. They arrived in New York City in late August 1862 and moved into an apartment at 118 2nd Avenue. Immediately following Carre単o's arrival, newspapers began announcing her arrival and plans to perform on the concert stage in New York City and other areas in New England.

A musical phenomenon has recently arrived in this city whose performances on the pianoforte are exciting quite a sensation. Mlle. Teresa Carreno, the little lady in question, is from Venezuela, and is only eight years old. Her education has hitherto been confined to the care of her father and one or two other amateur musicians. She is a pretty and intelligent little creature, and is in every respect like a child of her age except in her performances. She plays the works of Thalberg, Prudent, Goria and other modern composers with a facility of execution that is truly wonderful. Her reading of the difficult compositions which she plays is entirely her own, she being too young to have ample studies of interpretation. This is in all cases refined, and often original and striking. Her power of [tone?], execution and style of phrasing are such that if one were to hear without seeing her it would be difficult to make him believe that it was the performance of a child. 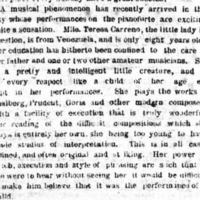