Questions about copyright and licensing of BSO Programs can be directed to the Boston Symphony Orchestra Archives.

The Boston Symphony Orchestra will give five matinée and five evening concerts at Carnegie Hall (not the Metropolitacn Opera House, as last year.) The matinées will take place at 2 o'clock on Wednesday afternoons, Nov. 9, Dec. 14, Jan. 18, Feb. 22, and March 22. The evening concerts will be given at 8:15 on Thursdays, Nov. 10, Dec. 15, Jan. 19, Feb. 23, and March 23. The programmes of the afternoon entertainments will be wholly different from those of the evening performances. The soloists will be Moritz Rosenthal, the famous pianist; Willie Burmeister, violinist; Lady Hallé, the eminent English violinist; Alvarez, the noted tenor, and Teresa Carreno, the pianist. The conductor will be Wilhelm Geriche, under whose direction the orchestra made its first appearance in New York.

The fifth and last concert for the present season of the Boston Symphony Orchestra was given last night in Carnegie Hall. The audience was a large one, but that was to be expected, because the subscription for the season was sufficient to insure it...

Mme. Carreno's performance of the MacDowell concerto was admirable in its rhythmic incisiveness, its tempestuous vigor, and its general breadth of style. She played the beautiful first movement especially with variety of feeling and ample poetry. The orchestra did all its work admirably, but in particular it must be praised for its brilliant performance of the Goldmark overture. 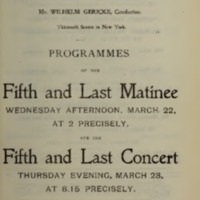