One of the greatest musical events of the season occurs at the opera house on Friday evening. Nothing is more sublime than pure orchestral music, and rendered as it will be by the Philharmonic orchestra—numbering fifty of the best musicians of New York—under the famous conductor, Dr. Leopold Damrosch, we are assured of a perfect performance. The recent Wagner Memorial concert at the Academy of Music, New York, by this orchestra, created a profound sensation, and the funeral march from "Die Gotterdaemmerung" of Wagner, as performed at that time, will be included in the programme here. The orchestra will be assisted by Mlle. Isidora Martinez, soprano, and Mme. Teresa Carreno, pianist. The sale of seats begins at Gallup & Metzger's music store, 169 Asylum street, this morning.

The large audience at the opera house last evening were regaled with one of the finest concerts Hartford has ever been favored with, and the interest and enjoyment went steadily on from the first number to the close of a rather long programme. The orchestra had not the ensemble that Theodore Thomas's band hand, and Dr. Damrosch has not that easy and graceful impassibility as a leader that Thomas has; but he certainly has more enthusiasm and fire and he guided his musicians in a most masterly manner. Damrosch differs somewhat with Thomas in the matter of tempi but if his players had the long experience together that the old Thomas orchestra had, the result would be even an improvement. The fifth of C minor symphony by Bethoven [sic] opened the programme, and received a most effective treatment throughout. Some of the crescendos in the finals were especially fine. The Serenade, by Volkmann, with 'cello obligato by Mr. Schenck, was a most beautiful composition, and the solo parts were given with purity and tone, and excellent phrasing and shading. The Wagner selection from "Götterdammerung," was not so well received as the other numbers, but was finely given. Mme. Carreno, who is an old and well-known favorite here surprised even those who know her best by her brilliant and masterly rendition of the pianoforte concerto by Grieg. The work is itself of great merit, and Mme. Carreno's conception and execution of it was one of the finest ever listened to in Hartford. She was recalled enthusiastically, as were the other soloists and the conductor upon nearly every appearance. No repetitions or encores were given, owing, probably, to the length of the programme. Mlle. Martinez was the prima donna of the evening, and gave an "air and variation" by Pacini, and an aria from "Mignon." She has a somewhat light but pure and sympathetic soprano voice, an unusually facile execution, and her singing was marked by the most artistic phrasing and good taste. The programme closed with the ever beautiful "Oberon" overture, which was rendered in a most exquisite manner. The audience was discriminating and yet lavish of its applause, and the reception of the programme showed the hunger for just what was given—a fine artistic orchestral performance of a most judiciously selected and thoroughly good programme 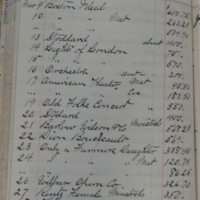