This concert was managed by J. W. Cochran. The concert began at 8:15 pm. Carreño performed on a Steinway piano.

Mme. Carreno Here After Long Absence—Greeted by Large Audience at First Piano Recital in This City for Many Years.—Less Strenuous in Her Art—Plays Selections from Chopin, Schumann, MacDowell and Liszt.

Mme. Teresa Carreño, for long years repeatedly a visitor to New York as an artist, reappeared here last evening in a pianoforte recital in Carnegie Hall for the first time in several seasons. She was warmly greeted by an audience not large in numbers, but highly appreciative of her playing. Time was when Mme. Carreño was considered a Valkyrie of the pianoforte; when tempestuous power was the distinguishing mark of her playing. It is no longer so; her art has mellowed and gained refinement in these later years.

She played better last evening than she did at her previous visit to New York. Mme. Carreño cultivates now beauty of tone and some reserve in the proclamation of even the most elemental passions, and in passages of tenderer and softer emotion her tone and expression are reduced to a finespun thread. She lingers, in fact, a little too long and too lovingly over such passages; and it has become almost a mannerism with her that piano and pianissimo have become synonymous with a marked retardation of tempo.

These things were to be observed in her performance of Chopin's B minor Sonata, op. 38, which had many aspects of beauty and poetry, as well as in that of Schumann's Fantasie in C. The middle movement of the Fantasie had, perhaps, too little of the "energy" demanded by the composer because of this tendency to caress every singing phrase and section. But, Mme. Carreño gave amplitude and sonority to the composition as a whole, and her performance was one of ripe artistic feeling.

She has been for years one of the devoted exponents of the pianoforte music of her one-time pupil, Edward MacDowell, whose music she plays with authority and intimate understanding. Last evening she offered his "Keltic" Sonata, op. 50—one that is less often heard than some of the others. Her program was brought to a close with three pieces by Liszt.

Mme. Teresa Carreno will give what is expected to be her only recital of the season at Carnegie Hall on Friday evening. Her program comprises Chopin's Sonata, op. 58; Schumann's Fantasie in C, MacDowell's "Keltic" Sonata, and Liszt's "Liebestraum," and "Au bord d'une source," and Hungarian Rhapsody, no. 6. 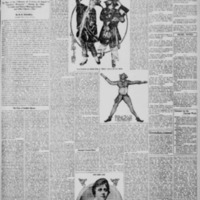