Mme. Carreno and Nordica. They Give a Joint Recital in Carnegie Hall.

A joint recital was given yesterday afternoon in Carnegie Hall by Mme. Teresa Carreño and Mme. Lillian Nordica. The conjunction of the two distinguished artists seemd to offer promise of unusual enjoyment to a large audience. The promise was not kept in all that it might have implied, however, since neither of the two seemed to be in her best form. Mme. Carreño played Beethoven's "Appassionata" sonata, a nocturne, etude and polonaise by Chopin, and three pieces by Edward MacDowell. There was much that was interesting in her playing; but the passion in the "Appassionata" sonata appeared stifled and suppressed, and she seemed unable to project such a vivid and glowing performance into her listeners' ears as they have so often received from her on previous occasions. The deficiencies of her playing originated in the singularly colorless and ineffectual tone that she produced.

Mme. Nordica sang songs by German, French, and English composers. She was not in so good voice as she was at her recent appearance at the Metropolitan Opera House, and some of her songs failed of their greatest effect. Her highest tones were produced with some difficulty. She put a good deal of dramatic fervor into her singing, which was sometimes accompanied by movements of the head and arms and changes of position upon the stage, none of which really intensify or heighten the significance which a singer can put into a song upon the concert platform. 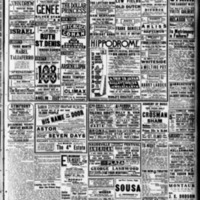