Mme. Teresa Carreño gave a piano recital yesterday in Carnegie Hall, her first appearance in a concert of this nature in New York during her present visit to this country. Her programme was one of the musical interest and artistic dignity, comprising three sonatas of the first importance: Chopin's in B minor, Schumann's in G minor, and MacDowell's "Keltic" sonata, and three pieces of Liszt's, the "Sonnet of Petrarch," and etude, and the sixth Hungarian rhapsody.

Mme. Carreño's art appeared yesterday in a chastened guise. Her playing is no longer of that strenuous quality that, as it used to seem, was apparently seeking to pass the limits of the pianoforte's powers of expression, and that sometimes bordered on boisterousness. It had more self-restraint, more of the sense of proportion. But it had power and a vigorous and masculine energy still, and her playing was full of poetry and a subtle feeling for the finer values of tone, of rhythm, of phrasing. The essential qualities of Chopin's sonata and of Schumann's were brought to a realization in a way that showed a profound sympathy with both these works, and understanding of them.

Mme. Carreño's playing of MacDowell's sonata, which has seldom appeared on local programmes, was likewise significant of her loyalty to her one-time pupil, whose music she has labored so valorously to make known and admired both in Europe and in this country. Her playing was much admired and much applauded. 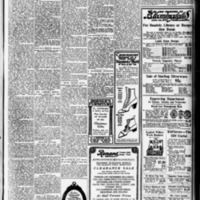