The extra concert by the Philharmonic Society Orchestra, which was given for the second time last evening at Carnegie Hall, was extra in point of quality as well as otherwise, It was a Tschaikowsky programme, and such a one as we might Imagine Mr. Safonoff takes huge delight In offering to his appreciative audiences. The satisfaction of both players and listeners was obvious at every moment of the concert, and there were ample reasons for the feeling on both sides. The first selection was the Fantasy Overture to the unrealised opera, "Romeo and Juliet." Under Mr Safonoff's leadership the overture proved its right to the name of fantasy; there was sustained throughout its varying moods an atmosphere of romance in the old, natural sense of this over worked word. The work of the horns in the piano passage, was exceptional, more than, atoning for a slight weakness of cymbals and drums in the fortissimo of the central climax. The orchestra was unusually successful in bringing out the curious effect of the droning of unnumbered themes in one of the later developments, which lovers of Tchaikovsky will, it is hoped, recognize under this phrase. Both in the solemn, organlike opening and in the tremendously typical last fortissimo climax the execution was unusually pleasing and smooth.

Mme. Carreño was the soloist in the Concerto for Piano in B fiat minor, op. 23. Before she had concluded her task—and it seemed to be something of a task to her—she had completely won over her hearers, although there were instants during the opening Andante when the laurels seemed hung beyond her reach. Mme. Carreño does not seem to pass quickly from fortissimo staccato to a piano melody without doing some slight injustice to the latter; or, at least, she requires a little time to warm up to her task. At the outset her melodic effects were noticeably sharp, and some arpeggios skimmed: also one trill lapsed a trifle. But every thing was made perfect tor the glory of God and the delight of the music mad in the following andantino semplice and the allegro con fuoco. The exquisite second movement was exquisitely given; and in the full throated third one the pianist's remarkable strength and steadiness proved to be just the virtues needed. The Sixth Symphony, the "Pathetlque," filled the second half of the programme; concerning it and the manner in which it was given, there is nothing to be said. Praise for either would be superfluous, and adverse criticism only a confession of a carping temperament. It is enough to say that, in this rendition, before a crowded, breathless house, Mr. Safonoff and his musicians "did themselves proud." 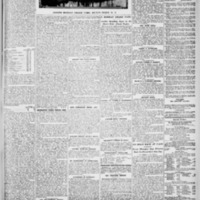 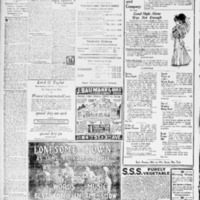