Carreño gave a solo performance at Carnegie Hall. According to the program, she performed the following works:

Due to the audience's wonderful reception, she performed four additional works:

The concert began at 3 pm. Prices for reserved seats ranged between $0.75 and $2.00. Carreño performed on a Knabe piano.

The success of Teresa Carreno's first piano recital has induced Rudolph Aronson to give the second recital at Carnegie Hall next Thursday afternoon. This is the recital originally announced for the Waldorf, but the limited seating capacity there occasioned the change to a larger auditorium. Mme. Carreno has selected a comprehensive and strong programme.

Mme. Teresa Carreno, pianist, gave her second recital yesterday afternoon. Her manager very wisely deserted the Waldorf for Carnegie Hall. The auditorium of the latter place is, indeed, somewhat too large to be filled by the attraction of any pianist who has not created a furor, but it is at least a room designed for musical entertainment and free from the disagreeable features which annoyed the audience at the first recital. The assemblage yesterday afternoon would have filled a recital hall, but it looked small in the Carnegie auditorium. It was, however, sufficiently enthusiastic when Mme. Carreno reached the part of her programme which was designed for the delectation of the many. Her list yesterday consisted of the following numbers: Beethoven's sonata, Opus 27, no. 2; Chopin's D flat prelude, nocturne in C minor, Opus 48, no. 2, valse in A flat, and ballade in A flat, a barcarolle and the "Valse Caprice" by Rubinstein, Liszt's "La Campanella," Beethoven's rondo, Opus 51, no. 2; Schumann's "Vogel als Prophet," and the Schubert-Taussig "Marche Militaire." This list was supplemented by four additions—in response to applause—after the Chopin numbers by the same composer's G flat étude, after the Liszt étude by Henselt's "Si oiseau j'etais," and after the final number by the Schubert-Liszt "Soirée de Vienne," no. 6, and the finale of Liszt's sixth Hungarian rhapsody.

Further study of Mme. Carreno's playing does not materially alter the impressions gained from her work at her first appearance. She has gained greatly in the intellectual side of her art, and intelligence now guides and controls her ebullient emotion. Her reading of the Beethoven sonata, for instance, was one that must have commended itself to every lover of the great Ludwig's music. It showed that she had made a careful analysis of the composition, and it was symmetrical, reposeful and in the earlier movements convincing. It erred, perhaps, in being somewhat too deliberate in its preparation of effects, and it was somewhat hard in tone in the last movement. But it was a good reading.

In the Chopin numbers the pianist again yielded to her fondness for an exaggerated tempo rubato, but not so frequently as she did at her first recital. The A-flat valse was marred by faulty pedaling, which blurred it badly, and the ballad was taken at so deliberate a tempo in its opening measures that it was quite heavy of foot. The faulty pedaling obscured some of the parts of the Rubinstein music, too, and the "Valse Caprice" was not played with that élan which one expects from Mme. Carreno. Both the Beethoven rondo and the Schumann number were played excellently, and the pianist gave a better performance of the "Soirée de Vienne" than she did at her former recital. 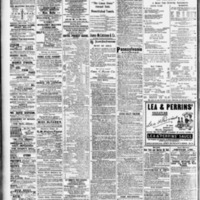