According to the ledger book from Roberts' Opera House, ticket sales from this concert totaled $251.10.

Please note that image may not be published without written permission from the Connecticut Historical Society.

The Concert To-Night. The De Murska concert at the Opera House this evening will without doubt be the finest musical entertainment of the kind in this city this season. Mlle. De Murska stands in the first rank of prima donnas, and her support is made up of the best available talent.

Mlle. De Murska, it will be seen, has chosen some of the most difficult and elaborate selections in the whole range of operatic music, and the lover of musical pyrotechnics will have an opportunity to listen to as brilliant execution as any concert stage will afford. Seats may be procured at Brown & Gross's to-day.

A telegram from De Vivo, manager of the troupe, says the concert last night in New Haven was an immense success. Every piece was encored. De Murska's singing of the "Carnival of Venice" was the feature of the evening. The audience was extremely enthusiastic.

Take it all in all the concert last evening was one of the most satisfactory we have had of late years. It was from beginning to end enjoyable. There was no padding of the programme, and each artist contributed a share to the pleasure of the audience. Usually a famous prima donna in the concert room is surrounded by sticks who occupy a large part of the bill without increasing its interest, but the De Murska troupe is made up of excellent artists. Mlle. De Murska did not disappoint the high expectations that had been formed of her. She is a light soprano of excellent quality of voice, and her execution simply superb. There is probably only one prima donna on the stage whose rendering of the "Shadow Song" is superior to De Murska's, and that, of course, is Adelina Patti. She goes through the most formidable obstacles of the score with the utmost ease, and shows a training which enables her to accomplish almost anything in the way of vocal gymnastics. She is perfectly at home in the runs and trills of the florid style of Italian music, but one can hardly imagine her attempting to express the deep and tender feeling of Handel's "Angels Ever Bright and Fair," in which Nilsson made so profound an impression. In the cavatina from "Linda" De Murska completely delighted the audience, who insisted upon an encore, and obtained one after some rather transparent reluctance to repeat on the part of the prima donna. She finally gave Schubert's "Serenade" with piano and 'cello accompaniment in the most exquisite manner. In the opinion of many this was the gem of the evening. The laughing trio by Martini was not given as expected, but the well known duett "Master and Scholar," in which De Murska and Ferranti were unqualifiedly successful.

After Mlle. De Murska, the feature of the concert, was the violoncello playing of Sig. Braga. This gentleman, on his first appearance, showed himself to be an artist of high rank. The violoncello is not generally a favorite solo instrument, but in the hands of Sig. Braga it was listened to with the closest attention, and enjoyed to the utmost. He played only his own compositions, among which a Spanish song and two meditations were perfect gems. Herr Habelmann was in excellent voice and sang the soulful German ballads allotted to him most successfully. He was encored both times, and in response to the first gave the well known serenade by Abt. Herr Habelmann's voice shows some signs of wear, but he sings with such taste and expression that he will long be a favorite in the concert room. Mme. Sauret [Carreño] showed herself to be an excellent pianiste, and her husband a clever performer on the violin. His execution was much admired but he didn't seem to get to the soul of the instrument. Ferranti as usual furnished the comic part of the entertainment, and amused the people as of old. The audience was small, numbering only 300 or 400. 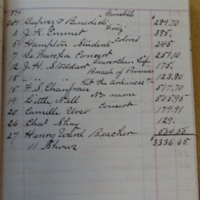